“I am the way and the truth and the life. No one comes to the Father except through me.” John 14:6 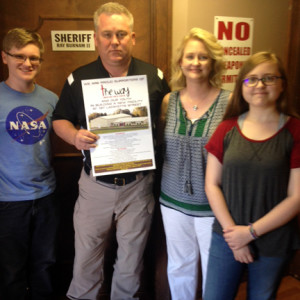 In sports, the best defense is often a good offense.

Trigg County Sheriff Ray Burnam applies that philosophy at The Way. And it reaps benefits.

The sheriff doesn’t want a kid’s first encounter with the law to be a bad one. He wants them to know law enforcement is their friend. So Ray and his deputies often spend evenings at The Way playing basketball or whiffle ball with students or just hanging out and talking with them.

The basketball games he has organized between his department and “The Way All-Stars” have been especially successful in building relationships and fostering mutual respect.

So when Sheriff Burnam recently became a Proud Sponsor of The Way, we were incredibly grateful but not surprised.  As much as his generous donation, we appreciate the precious time he gives to those who attend The Way.

The Way thanks Ray and his family – son Tyler, wife Tasha and daughter Tori – for becoming silver sponsors. And we look forward to seeing him and his deputies in our new youth center behind the school campus.

Thanks to our LORD and SAVIOR JESUS CHRIST for over a dozen students who have accepted HIS Forgiveness and Gift of Salvation since June of this year ---at Hillcrest Camp, The Way and most recently Discipleship Now (DNOW). We are still following up with several additional students who we believe made professions of faith at DNOW. The Way follows up with each student to make sure they fully understand their decisions and to discuss “next steps” including Church Membership. Each student receiving CHRIST is presented a Teen Study Bible with their names embossed on the front cover. Following are some of the most recent presentations. ... See MoreSee Less

PLEASE PRAYERFULLY CONSIDER HELPING THE WAY WITH A TAX DEDUCTIBLE YEAR END CONTRIBUTION The Way is an all volunteer, non profit (501 c 3), multi-denominational Christian Youth Center, established in 2011, which provides many services to Middle and High School students. Everything absolutely free; thanks to the love and generosity of Trigg County Churches/Christians and other Citizens THANK YOU FOR YOUR PAST SUPPORT. WE HAVE WORKED HARD TO BE WORTHY OF YOUR TRUST. GOD HAS USED YOUR KINDNESS TO ACCOMPLISH THE FOLLOWING AND MORE. ---Ministering to an average of over 400 different students each year; approximately 80 daily.---Almost 12,000 SF Facility, with gym and computer room. Built 2017. Debt Free 2019.---Over 9,000 meals served each year and numerous activities in a safe and uplifting environment.---Two faith based “scouting” programs (American Heritage Girls and Trail Life Boys) with enrollment of over 40 students.---Daily devotions by local pastors and lay persons. Lives changed; many for eternity.---Hosts Adult Education Opportunities including GED completion and Lighthouse Medical School---Annual Seminars to Students (Suicide Awareness/Prevention, Sanctity of Life, Purity Before Marriage, Anti-Drugs).---Participation in area Youth Events e.g. Discipleship Now, Christian Summer Camp, Experiencing GOD Weekends etc.---Partnerships with Trigg Schools on Educational Programs, Teen Clothes Closet, and complimentary hosting of facilities.---Hosts Community Service Events e.g. Job Fairs, Health Fairs, Blood Drives, and Voting Location.---Ministries for “Seasoned Citizens”. ---Partnering with Churches and charitable activities to assist students and families in need. WE HUMBLY ASK FOR YOUR FUTURE TRUST AND SUPPORT OF PROPOSED DISCIPLESHIP/EDUCATION BUILDING The Way’s Board of Directors has approved fund raising efforts to construct a 3,500 square foot (ground floor) Education/Discipleship building which will contain two classrooms, library, prayer room and bathrooms. Classrooms will provide dedicated areas for more Christian education and secular training (including job/career) as well as uplifting movies. Such activities are difficult to accomplish in existing facility with 80-100 active students present many days. Library will contain Christian resources for use by the entire community. Building will also provide periodic opportunities to provide services to younger students (Intermediate and Elementary) including after school “VBS like” activities. We have nearly 1/3 of the estimated $450K required. If GOD’s will and with your generosity, we hope to have funds raised and completed building open to students during 2023-24 School Year. Please keep us in mind during the months ahead and, if led to do so, give a tax deductible donation. Please do not divert any gifts from Churches or any deserving charities to which you normally give. Donations can be sent to PO Box 572 Cadiz KY. 42211, use of PayPal on our FB Page, or brought to The Way on 197 Lafayette Street. If questions, please call 498-1933. Thank you and may GOD Bless your celebration of Thanksgiving and CHRISTmas. The Way’s Volunteers. ... See MoreSee Less

“Discipleship Now” (DNOW) is a wonderful example of how GOD uses each of you and honors your sacrifices to accomplish the “Great Commission” in Trigg County. Thirty Three of our students attended DNOW Youth Rally at Edgewood Baptist Church in Hopkinsville last weekend (November 4th and 5th). The majority of these students are unchurched and many have only attended Church a few times in recent years, if at all. A few were new Christians. The Way (and you) are the reason All were at DNOW. The first two photos below are of the “altar call” at the closing service of DNOW on Saturday Night. Praise the LORD, at least half of our students went to the altar. Approximately 10-12 of our students raised their hands to accept CHRIST. Praise the LORD!!! We are trying to follow up with each one to determine what decisions were made and, as much as humanly possible, to be sure each student understood and is certain of their commitment. The follow ups ideally and usually include at least a 20-30 minute “counseling session” with Leaders at The Way and/or local Pastors. So far we have spoken with seven students. Six of those appear to sincerely and totally have accepted CHRIST as SAVIOR. The importance of Church Membership, Baptism, Bible Reading and Prayer have been emphasized and we have begun efforts to link them to possible Churches. A Teen Study Bible, with their names embossed on the cover, will soon be presented to them by The Way. Please keep these new Christians in prayer. ... See MoreSee Less

Please see the below attached architectural rendition of an absolutely vital (and I believe final) facility part of the LORD’s Ministry at The Way. Thanks so much to Gary Gossett Architectural Drawing Firm and John Oliver of Ace Drywall and Acoustical for providing this “pro bono” to The Way. If GOD provides an opportunity, please contact these gentleman in the near future and thank them for their kind assistance. PRAISE THE LORD for the first steps in making the dream of a Discipleship/Education building a reality! The LORD has been so Awesome in honoring our Faithfulness by bringing young people, at The Way, into a saving knowledge of HIS SON, JESUS The CHRIST. There have been 3 young people accept CHRIST in the past ten days and 7 since the start of the School Year. However, there is a Great need for a building dedicated to helping our students grow in knowledge of CHRIST and closer to HIM. Also, where possible to help prepare them to be better able to live successful lives, provide for their future families and give back to the community. As you know, The Way’s Board of Directors, earlier this year, approved fund raising efforts to construct a 3,500 square foot (ground floor) Education/Discipleship building which will contain two classrooms, library, prayer room and bathrooms. Classrooms will provide dedicated areas for both Christian education and secular training (including job/career) as well as uplifting movies and other beneficial uses. Such activities are difficult to accomplish in existing facility with 90-100 active students present. Building will also provide periodic opportunities (e.g. after school Bible Schools) to provide services to younger students, not currently a part of our core competency (Middle and High School students). Estimated cost of building designed is upwards of $450K. We are also having discussions on the addition of “tornado/storm” shelter, which would be the “basement” of planned facility to benefit community and provide additional ministry space. Hopefully, there will be even more exciting news to share in the future!We do not plan on borrowing money, so fund raising efforts will start very soon. Please be in prayer, that if GOD’s will, the needed finances will be immediately forthcoming so we can quickly start on building while still keeping our total focus on serving students. Please let others know about our plans and needs and ask they pray if GOD would have them give a tax deductible gift as we approach the end of the 2022 tax year. ... See MoreSee Less

Twenty eight students, mostly Middle School, who graduated from the 2 022-23 1st Quarter of “Wildcats At The Way” attend Christian Way Farms in Christian County this morning (Saturday October 22nd). The Farm is owned and operated by a Christian Family which subtly uses it to share the message of CHRIST to all who attend. There are many activities for families of all ages, including corn maze, pumpkin patch, corn shelling, hay rides, miniature golf, petting zoo, etc. Thanks to the Trigg Schools, Laura Shelton and Federal Grant funding, students were able to participate in all these events, have pizza for lunch and take home at least one of the literally thousands of pumpkins on site. Maureen Llarena was the school representative on the trip as was the bus driver, Bobby Sutton (Worship Leader at Ponderosa Baptist Church). Maureen did a wonderful job as always. Bruce Grace and myself represented The Way. GOD provided an absolutely beautiful fall day for the trip. Please take a moment to enjoy the below pictures. ... See MoreSee Less

2nd quarter classes are coming up for Wildcats at The Way ... See MoreSee Less

We will close at 5 PM today Oct. 18th in order to set up for Trigg County Election Candidate Forum/Debate which starts at 6 PM. We will also close early on the 25th for 2nd and final forum. ... See MoreSee Less
View on Facebook
· Share

Regret these photos are not being sent in a timely manner, but hope you will enjoy anyway. They are not in chronological or really any other order. Will endeavor to do better during the remaining 3 quarters of WATW. ... See MoreSee Less

More pictures from a successful 1st Quarter of WATW. Do yourself a favor and take a minute to enjoyl ... See MoreSee Less